CHERYL MOORE on childhood in Iran and writing b*!ches

The blogsphere is literally exploding with talented writers and poets, very few of whom get the attention they deserve. INTERVIEWS will introduce you to a new generation of writers and thinkers. So watch this space, who knows what you’ll find . . . 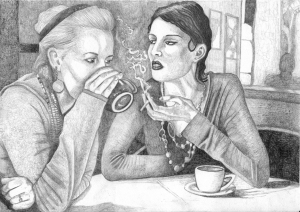 Writer and illustrator Cheryl Moore talks about her childhood in Iran, her love of strong and difficult heroines and how writing helped her cope with the loss of her father and her faith.

Tell us a bit about yourself.

I was born in 1974 and live in Hampshire, Southern England with my son, my ex, four cats and loads of imaginary characters.

When and why did you begin writing?

I was about eleven or twelve and very socially inept, when I wrote my first short story. From an early age I’ve never really felt part of the real world. Although I am interested in real people, I feel somewhat disconnected for large intervals. I felt my body and my self didn’t quite belong together, because I wanted to be treated the same way as my brother, but society and nature derailed this delusion. I found I was one of the ‘odd children’ at school and it was hard to fit into groups, (Unless of course they were compiled from other ‘odd’ children.) I used to face this inability by becoming different people inside my head, by placing myself into the role of someone I was more comfortable being. Children do this a lot, but for some reason I never quite grew out of this phase. I found comfort in writing. It enabled me to express myself in ways that eluded (and still elude) me in real life.

You now live in England, but for 9 months of your childhood you were living in Iran just before the 1979 revolution. Has this impacted on your writing at all?

Iran haunts me, and has a big influence on my perception of the world. I have vivid pictorial memories of a completely different place and culture to that in which I live now. I often wonder what I’d be like if I still lived there and our family didn’t have to flee. I was learning Farsi but now only know how to say “Hello Sailor!” It’s enabled me to imagine myself in other places too, perhaps, and to a degree living a different life. Maybe that’s why I have so many characters from all over the world in Unbound Boxes Limping Gods?

How much of what you write is based on personal experiences?

I write a lot about loss, recovery and hope. My father died when I was twenty-one and that has had a big influence on my writing. His death made me question a lot of things, as I attempted to accept the finality of it. It came at the same time I lost my faith. I wouldn’t wish losing your belief in God on anyone, but that’s what happened to me at the same time I lost my father. I have no problem attempting to come to terms with these bad things in a fictional context. I’m still not very comfortable or proficient living in this world and the same can be said for most of my characters. I write about recovering from bad experiences, and that’s quite a strong thread throughout my stories. Hope springs from grief, along with many other conflicting emotions, which become fictional cocktails, mixed to create new lives, lived far away from the grimness of something so painful. I learnt to take parts of the real world and place them safely into new people, fashioned from everything and everyone who has had an impact on me in reality. It’s hard to pinpoint any one thing, but I invest a lot of my own emotions and memories into everything I write. It’s the only way to connect with people who read it, by making the characters real. There are parts in my work that I can directly relate to, and some characters are loosely based on friends and family, but they probably wouldn’t recognise themselves, thankfully!

What kind of characters do you enjoy writing the most?

Strong, unpredictable, emotionally damaged women fascinate me, the character Alexand Merek is a prime example. With the micro stories I’ve learned to focus on other types too, those who are misunderstood on first impression, and survivors who have surfaced from dark places. I also love writing for b!*ches, it’s very cathartic (Alexand’s twin sister Heyem is a favourite b!*tch of mine and injects a bit of humour) I’ve learnt that men and women are more complex than I used to give them credit for. (Something I learnt from my very wise Nan) I like writing about their history, surprising myself and learning new things about a character I had preconceptions about.

What are your current projects?

Are there particular themes or issues you like to explore in your work?

My writing is character driven, and allows me

to explore some of the themes I talked about previously, but I’m looking for answers about mortality, and never quite finding the comfort I had from previous religious convictions. I also explore sexuality, a lot of my characters are gay or bisexual or transsexual and a good proportion of them are women. I’ve always felt like an outsider and I think that shows in my writing.

What do you feel are the most important elements of good writing?

Primarily, to write what you want to read yourself, and hopefully others can relate to that. Readers can smell if it’s not authentic. To make something believable has to come from genuine emotions and a strong connection to the characters. I personally have to become the characters when I write them, to see them, as real human beings, and I never forget how critical a reader can be if I can’t take them on that journey with me.

Now go and see for yourself! To read more about Cheryl’s Unbound Boxes Limping Gods, click to visit her blog!

10 thoughts on “CHERYL MOORE on childhood in Iran and writing b*!ches”

So, what you do think? Cancel reply 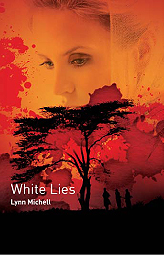